The Quicksilver Eddie Aikau Big Wave Invitational at Waimea Bay, is one of the most prestigious contest for big wave riders. In memory of the legend Eddie Aikau, the contest feels different than any other event. Only the best surfers are given the honor and chance to compete and prove themselves on the North Shore’s Waimea Bay. When watching the event one cant help but feel like they are blasted to the past. Only a hand full of guys out, surfing huge Waimea on huge boards, that’s what it must have been like back when Eddie Aikau was surfing it. For those who don’t know the history of Eddie lets take the time to appreciate a legend.

Growing up in Hawaii, everyone knows who Eddie Aikau was. He was an extraordinary Hawaiian water man and big wave surfer. Eddie was the first official lifegaurd on the North Shore and he was station right here at waimea bay. The years that Eddie watched the beach not one life was lost at Waimea. He won awards for his surfing, he even took first at the prestigious Duke Kahanamoku Invitational Surfing Championship in 1977. Ever heard the saying “Eddie Would Go” it refers to his no fear attitude when it came to big waves. It was my uncle, Mark Foo, who first used that phrase and it has never died since.

On top of his accomplishments in the water Eddie also became involved in perpetuating Hawaiian heritage in the community. In 1976, the Polynesian Voyaging Society sailed the Hokule’a (traditional Hawaiian outrigger canoe) on a successful 2500 mile journey that took 30 days following the ancient route of the Polynesian migration between the Hawaiian and

Tahitian islands. The following year Aikau was selected fto join the crew of the Hokule’a. The Hokule’a left the Hawaiian Islands on March 16, 1978. Quickly they encounters trouble, The Hokule’a began to leak. The leak combined with rough seas caused the outrigger canoe to capsize 12 miles of the coast of Molo’kai. In attempt to save his fellow crew members, Eddie makes a desperate move and attempts to paddle to shore. However, hours later the Coast Guard found and rescued the crew, and Eddie Aikau was never seen again.

This is why this particular event, The Eddie, is so important here in Hawaii. It’s about rushing huge waves yes……but more so remembering a legend, a true Hawaiian that loved the ocean and respected its power.

Lets cross our fingers and hope that Eddie blesses us with some huge waves this year so the contest can run!! EDDIE WOULD GO 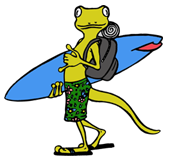